The Temples of Anuradhapura

For a lot of the people in Sri Lanka religion is not something to celebrate on Sundays, to think about before or after dinner, or to deal with before going to sleep. No, it is part of their daily life. Two third of the people of Sri Lanka are Buddhist. Buddhism formed the character of these people and their ideal world of peace, tolerance, kindness, hospitality and love for all living things. The Buddhist monks practice this lifestyle, only possessing what they are wearing. Buddhists have lots of places to worship. They have their Buddha statues, stupa's and temples everywhere, from small to huge.

When making a tour over the island of Sri Lanka, formerly known as Ceylon, it is impossible to miss the city of Anuradhapura, or more particularly, the temples of Anuradhapura. Looking over one of the artificial lakes, called tanks - fresh water reservoirs dating from as far back as the 12th century, you can't ignore the view on the two giant stupa's, standing out high above everything else on the horizon.

As said, if you come along Anuradhapura, you can't miss these stupa's. Some of them are really huge and as part of a tour through the sacred city, you will see them all. At least, it feels like the guide is trying to show all of them, which is practically impossible since the number of temples in Anuradhapura is countless, I think. Anyway, some of these temples are definitely worth visiting, although not for the faint of heart. You will have to climb the stairs, you will have to give away your shoes - only temporarily and take my advice: wear socks because the soil is bloody hot - and you will have to take off your hat. You are not allowed to have anything on your head! If you do not have much of your own on your head - no hair, just like me - try not to get a sunstroke. Always use anti-sunburn and if they allow you, just use your umbrella (like the monk). 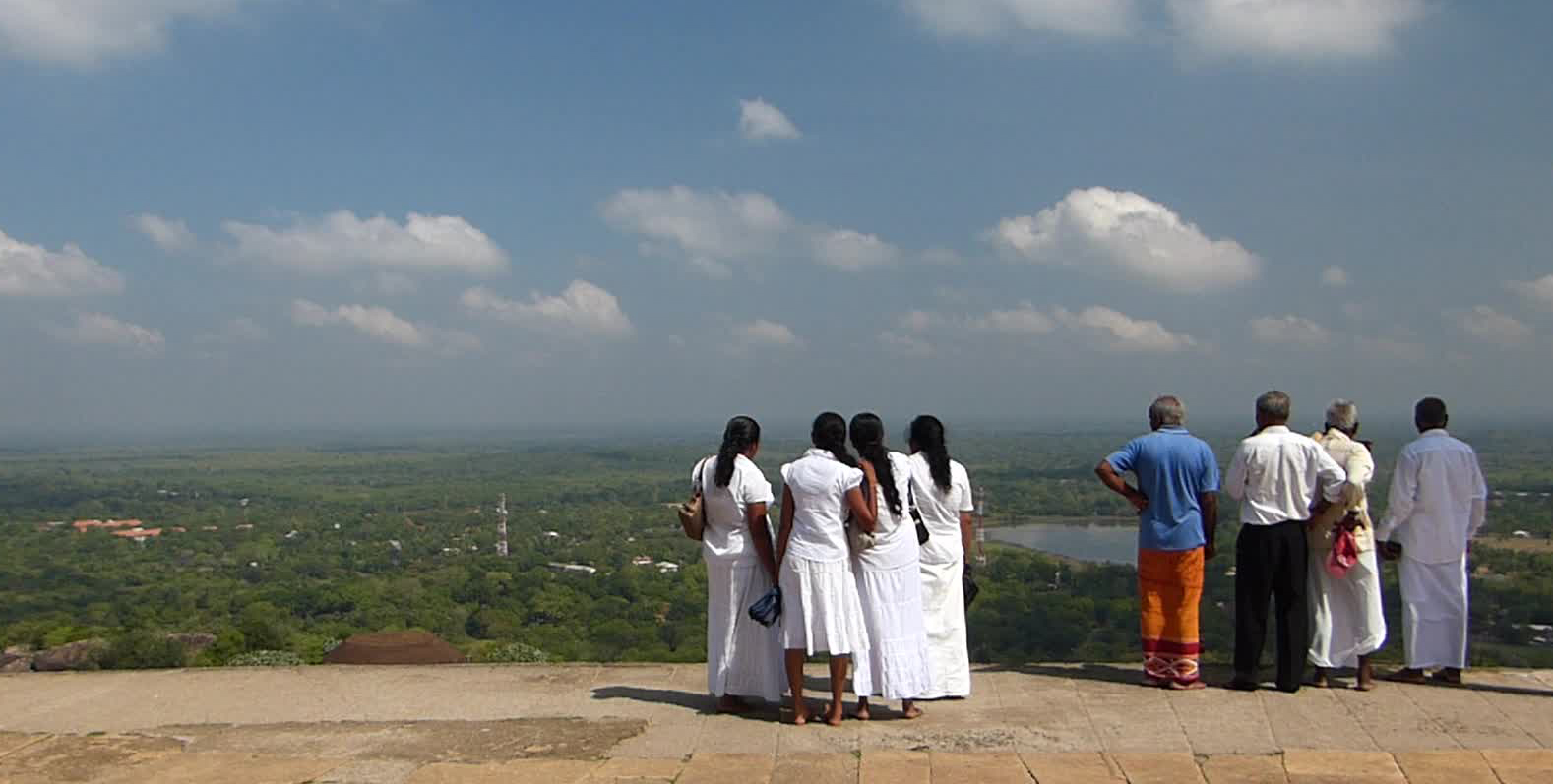 And you will will be rewarded. The views from the top are just stunning.

Frankly speaking, we started with the most beautiful stupa of Mihintale. After that, for us it gets a bit less interesting and after a stupa or 8 you might start to think you have seen them all, which is of course far from the truth. Some of the stupa's are really in use as a temple, eye blinding white in the sunshine and receiving lots of locals to worship. Others are not painted, just brown stone, but still huge. Not many visitors. 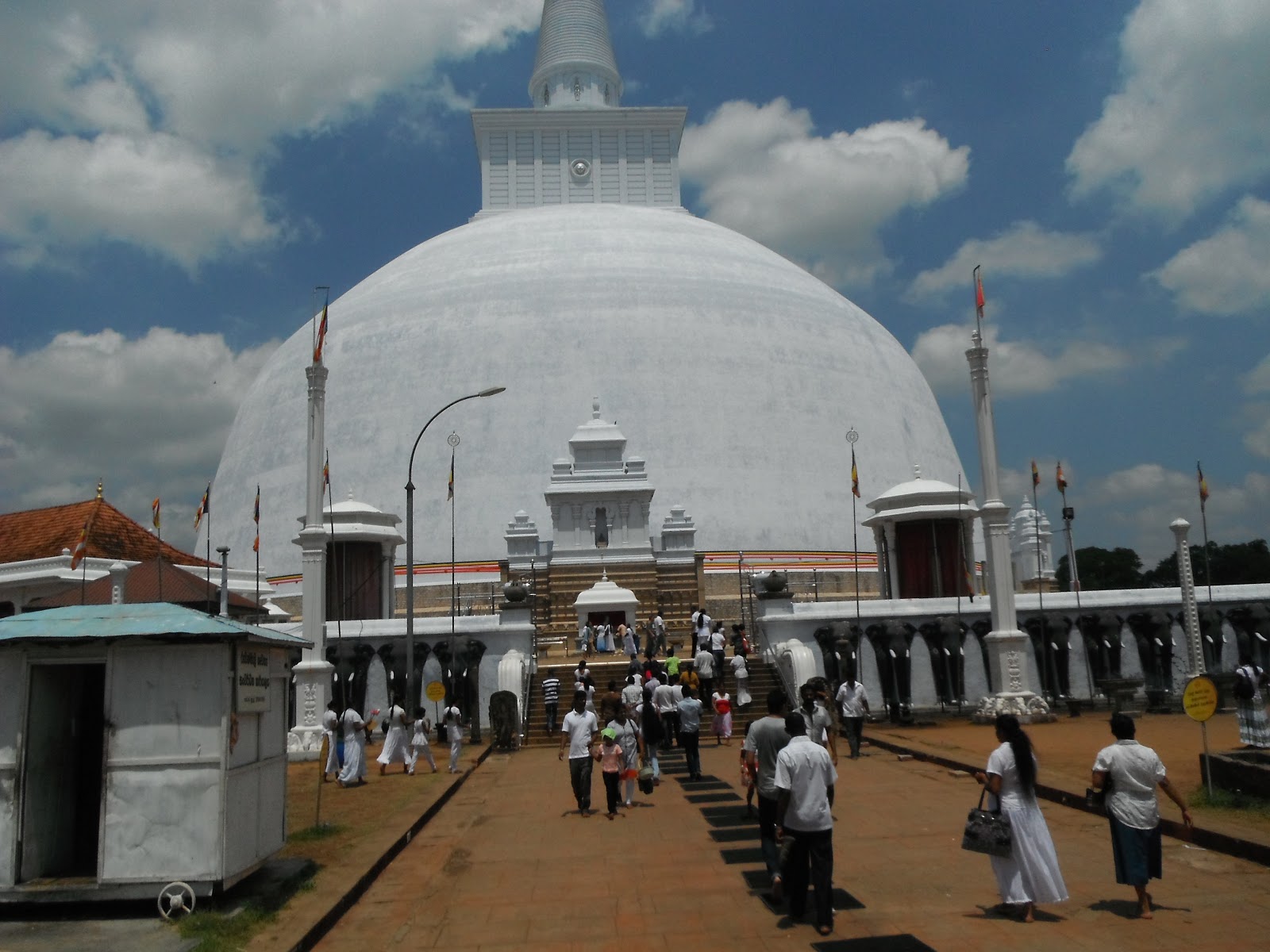 Did I mention already the ubiquitous monkeys? Well, they are almost everywhere and it is fun to watch them. The youngsters playing and teasing the elderly, as we ourselves maybe would like to do but do not do.

Of course, the monkeys are wild animals, but we have not witnessed any aggression, theft, or any other type of inappropriate behavior. At least, when you do not consider holding your baby upside down as such. 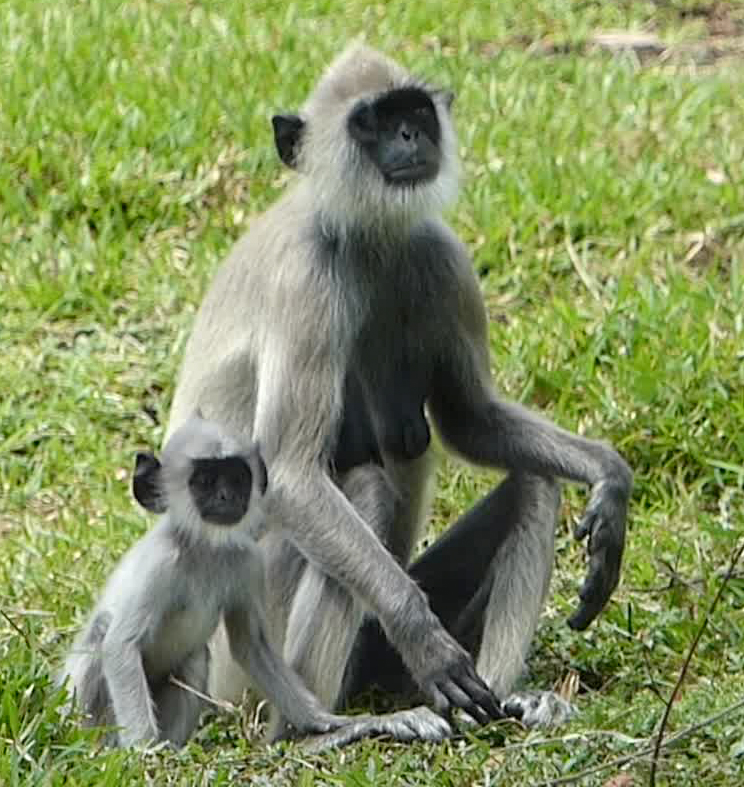 Among the visitors you also see a lot of monks in their orange outfit. We were even interviewed by a monk, apparently exercising his English and an attempt not getting unworldly. And this is, apart from stunning views, the real reward you will get. For us, western people, this is such a colourful and unknown world. Be prepared to immerse in this ocean of new experiences.


There is so much to see, feel, hear and smell. In Sri Lanka you will use all of your senses to get a taste of this wonderful country.


Watch the video of a visit to the Temples of Anuradhapura:

For the benefit of anybody else, don't be shy, tell us what crossed your mind.